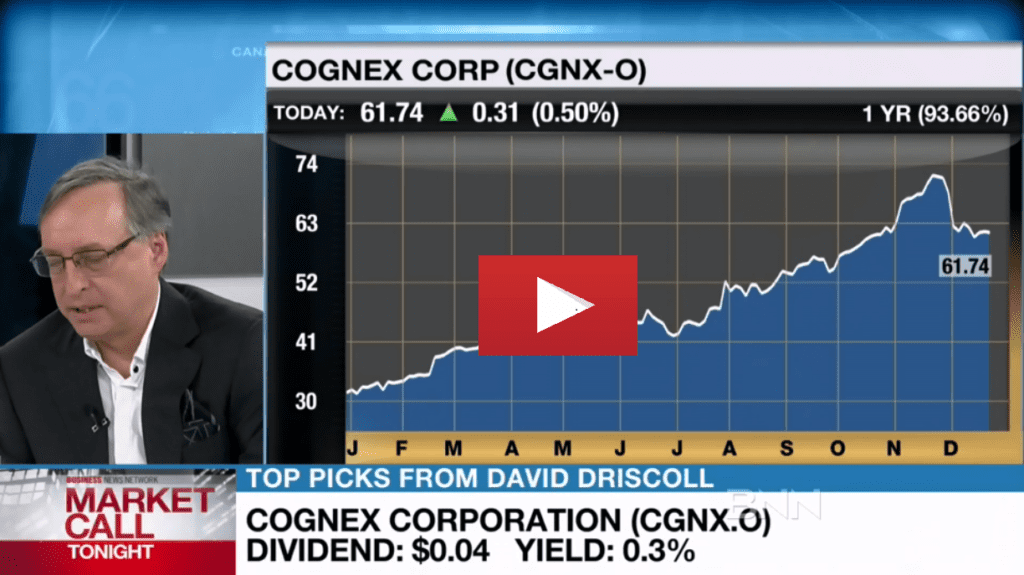 CN RAIL (TSE:CNR)
Canada’s #1 railroad and one of the largest in North America. It operates a network of about 20,000 route miles of track spanning Canada and the United States, connecting the Atlantic, Pacific and the Gulf of Mexico. Crossing the continent north-south and east-west, CN hauls freight such as coal, forest products, petroleum and chemicals, grain and fertilizers and auto parts and vehicles. If the economy continues to expand by normal growth or with higher demand caused by U.S. tax cuts and/or infrastructure spending, the movement of resources and hard goods should be in high demand and CN Rail should be a benefactor of those trends. Last purchase was December 11th at $102.78.

COGNEX CORPORATION (NASDAQ:CGNX)
Makes machine vision systems. In effect, they are the “eyes” of the robot as they make cameras that watch the movement of assembly lines in 2D or 3D to inspect for errors and defects. Their machines also read luggage tags at airports and direct the baggage to the proper carousel for faster delivery. The company was started in the 1970s by a bunch of MIT graduates but began hitting its stride in 2016. Demand has picked up quickly – its five-year revenue growth rate is 24 per cent. They have over 1,000 patents issued and pending and serve the industrial, consumer, semiconductor, life sciences and technology sectors. Its fastest growing application is logistics – it has the broadest portfolio of vision-based barcode readers for factories. It’s currently 10 per cent of Cognex’s revenues but growing 50 per cent annually. Last purchase was December 11th at $63.31.

UNILEVER (NYSE:UN)
Makes branded and packaged consumer goods. Some of their name brands are Dove soap, Breyers, Magnum, Ben & Jerry’s ice cream, Lipton tea, and most recently razors and blades (Dollar Shave Club) and diapers (Seventh Generation); the latter two purchases made to connect with the millennials. Compared to other consumer product companies, Unilever has the most global reach in countries with growing populations, as 43 per cent of its revenues come from the Asian continent (mostly India and China). KraftHeinz has only 12 per cent exposure there. Unilever’s recent sale of its spread business (Becel, etc.) for US$6.8 billion will help it develop new brands in higher growth areas (personal care and home care) and fund a higher dividend which has grown 10 per cent a year for the past decade. Last purchase was December 11th at $57.34.